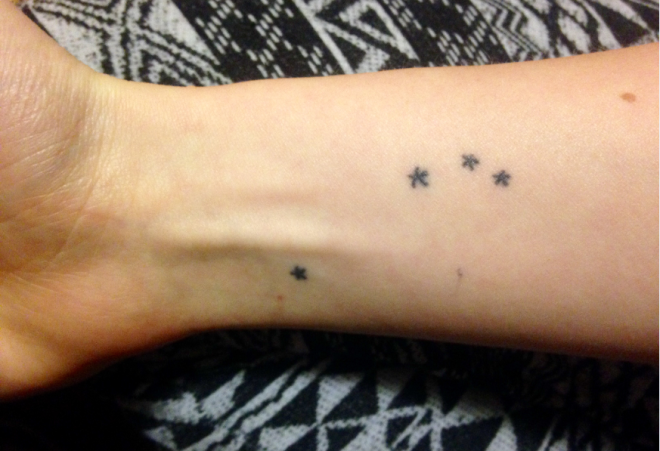 [A version of this essay can be found in Wizards in Space Magazine, Volume 2.]

Before I knew I was nonbinary, I decided I was a stargazer.

When I was fourteen, I started studying celestial atlases and writing down the names I found there. At first this was just an attempt to find inspiration – possible characters for a story whose plot I don’t remember now – and I just sort of picked them at random, jotting down the ones I liked the sound of in a small leather-bound notebook (a gift from a teacher who said she “knew there were words in me, waiting to get out”). At some point, in between dreams and daylight and countless scribbles, these stars became something more; they weren’t just for my stories. Rather than give them to my characters, I began to imagine how they might feel on me, what it would be like to claim one for myself. One name in particular stood out from the beginning: Ari, stolen from a star called 41 Arietis, one hundred and sixty-six light years from our planet’s own sun.

41 Arietis is the brightest and most powerful object within Aries, the zodiac sign that marks my date of birth. It is also a remnant of multiple other constellations that are obsolete and almost forgotten, bearing traces of fading mythologies; it defies the constraints of time and escapes classification, existing in multiple forms at once. Depending on which legends you believe, this star helps form the celestial shape of a ram, a bee, a lily, or (in a more scientific view) an unending and random tapestry of hectic light. There’s something about the unity of these forms that is poetic to me – this star is formed from fire but touches earth, air, and water, as well as illuminating the utter chaos and uncertainty of the universe at large.

I don’t know why this star stood out to me at first, but I felt something tugging me towards it, towards the name. Ari. Without realizing what I was doing, I tugged it from the sky with my bare hands and hid it underneath my pillow, a glimpse of an identity that hadn’t yet come into view but that I would soon find the courage to begin to untangle. When I fell asleep again, this star burned into me – its silent sparks nearly setting me ablaze – and I knew somehow that it was here to stay.

As far as I can tell, the universe terrifies more often than it inspires. There’s a reason we spent thousands of years believing this planet was flat: the vastness of the alternative is too much to fit within the collective human consciousness, let alone individual comprehension. We have always made space into stories to make it easier to stomach; it’s far easier, far safer to look up and sew the distant pinpricks of light into shapes and figures and guiding ghosts than it is to accept the chaos and heat and impossible distance of a trillion whirling suns. I am not immune to this fear – I spent years of my childhood tossing and turning through nightmares in which black holes consumed me, and I have been known to fall into existential crises if I spend too long trying to find constellations in the city-stained night sky above me – and yet I have found that there are worse things to be afraid of. In the face of all the terrors we face, I choose to embrace the stars, because it is perhaps the one fear that is beautiful enough to draw me towards it despite the risk.

I have been lost inside of my own universe, my body, for almost as long as I can remember; I have spent a lifetime struggling to believe that I deserve to be here, suffocating under the weight of inaccurate assumptions and incorrect pronouns and toxic cultural narratives that portray me as delusional and wrong. This is why I turned to the stars: when you cannot trust yourself, it’s easier to trust anything and everything else. You seek solace in the unknown because it has to be better than the known facts of every inch of you. And if you look hard enough, for long enough…it begins to come full circle. After all, as they say, stardust runs through our veins.

As much as scientists and storytellers try, they will never be able to fully explain or measure all the mysteries of the universe. And while there’s a beauty in that, there’s also a salacious and satisfying fuck you: to order, to definition, to needing an answer for everything that exists. When I chose my new name, it was a fuck you to society and to the gender constructions that have pressed me into hating who/what I am for so damn long. Fuck you, I’ll be beautiful and powerful and mysterious on my own terms.

My first and only tattoo is the Aries constellation, with 41 Arietis closest to my palm. This is a constant and permanent symbol of my identity, a small and quiet protest against years of being told I didn’t belong. It’s a reminder of the stars inside and outside of me, and how I am finally making this body my home.

YA and MG Author